Walking the South West Coastal Footpath is one of the finest places to hike in South West England. The section at Hartland Point in Devon is renowned for its dramatic cliff scenery but also has a memorial stone to a World War One hospital ship.

Hartland Point is one of my favourite places in Devon, mainly because of its wild dramatic scenery. The geological features of the cliffs with rocks intersecting each other, the views of Lundy Island, and the superb walking all make it a fabulous place to visit. So while walking on this beautiful stretch of the South West Coastal Footpath I was familiar with stories of shipwrecks and smuggling but had no idea about the tragedy of the Glenart Castle- until I happened to see the memorial.

My walk started from the blustery car park at Hartland Point. Even on a sunny day the wind can be deceptive and blew me along the coastal footpath towards Hartland Point Lighthouse. Gates blocked further access due to rockfalls in the area. The white outline of the lighthouse can still be seen from the cliff. An information board detailed the wreck of the Joanna which was swept aground in 1982.

I continued, following the trail with the sea to my right, admiring the splendid views of the coast. The path crossed farmland but after around 300 metres I came across the memorial to the Glenart Castle and paused to read the stone carving. The sea lapped below and sea pinks swayed in the breeze. 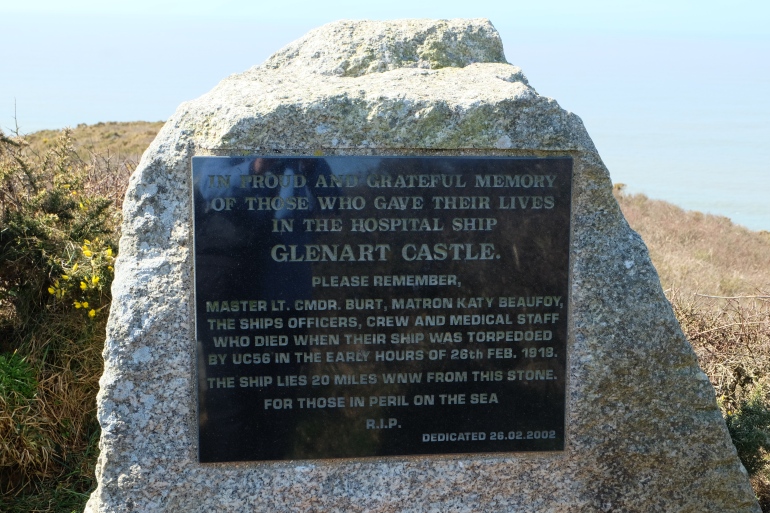 On the 26th February 1918 at 04:00 the hospital ship Glenart Castle was hit by two torpedoes off Lundy Island as she made her way to France. The vessel was lit up as a hospital ship,and was seen by local fishermen. However the German U Boat fired its devastating load, destroying most of the lifeboats. It took eight minutes to sink and Of the 200 people on board just 29 survived. All eight nurses on board were killed as were most of the officers, crew and medical staff.

Matron Katy Beaufoy came from  Birmingham and had served as a nurse in the Boer War, and Gallipoli, but continuing her work during the entire war. Katy Beaufoy volunteered as soon as war was declared.  She had cared for thousands of wounded soldiers and kept a detailed diary during the war. In 1916 she was appointed matron of the Dover Castle but was not on board when that was torpedoed in 1917. The appointment to matron of the Glenart Castle followed and she was on board on that fateful night in 1918. Sister Beresford and Sister Blake who were also killed had been caring for German prisoners of war.  It was a sobering reminder of the danger that nursing and medical professionals place themselves in each day.

The memorial was erected by the family of Katy Beaufoy and Captain Burt.

I continued along the path reaching a small valley where the River Abbey runs into the sea. There’s a choice here of either continuing the coastal path to Hartland Quay or to turn inland and return to the car park. The other choice is to sit on the side of the trail and admire the breathtaking views of the coast while having a short break.

I turned inland following the valley, turning left  through a delightful woodland area, past Blagdon Farm and eventually arrived back at the car park at Hartland Point. It had been a beautiful walk but with a poignant moment to remember the Glenart Castle.

Loos: pre Covid 19 these were in the village of Hartland 4 miles away. 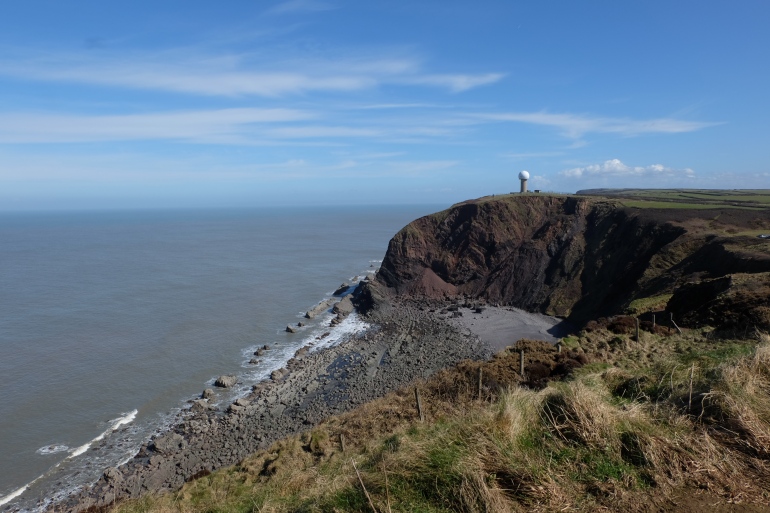