Postman’s Park is tucked away in the City of London,  next to St Bartholomew’s Hospital  and a few steps from St Paul’s Cathedral. It is a tranquil spot, and an escape from the city but there’s more to this park than meets the eye. Postman’s Park is home to a very special memorial comemmorating Londoners who sacrified their lives for others. Three of the plaques are dedicated to doctors.

The Watts Memorial of Self Sacrifice was established in 1900. Designed by George Frederick Watts, it is a striking pavilion in the centre of Postman’s Park and full of ceramic plaques dedicated to ordinary Londoners who sacrificed their lives to save others. Although there were 4 plaques when the memorial was launched there are now 120, each with a tale to tell. There are stories of remarkable bravery such as Henry Sisley age 10 who died trying to save his brother in 1878. Or Mary Rogers stewardess on the Stella who gave her lifebelt to someone else and went down with the sinking ship.

Three doctors are listed on the memorial. Samuel Rabbeth was a doctor at the Royal Free Hospital in London. In October 1884 he was treating a 4 year old child with diptheria. The child had an airway obstruction. A tracheotomy was needed but did not relieve the problem. Dr Rabbeth used a tube to manually suck out the infected matter. A few days later he died of diphtheria as did the child. I reflected on him and the issues I have been taught around safety in resuscitations and the personal protective equipment (PPE) issues in the coronavirus pandemic today. What thoughts were going through this young doctor’s mind. He was just 28 years old. 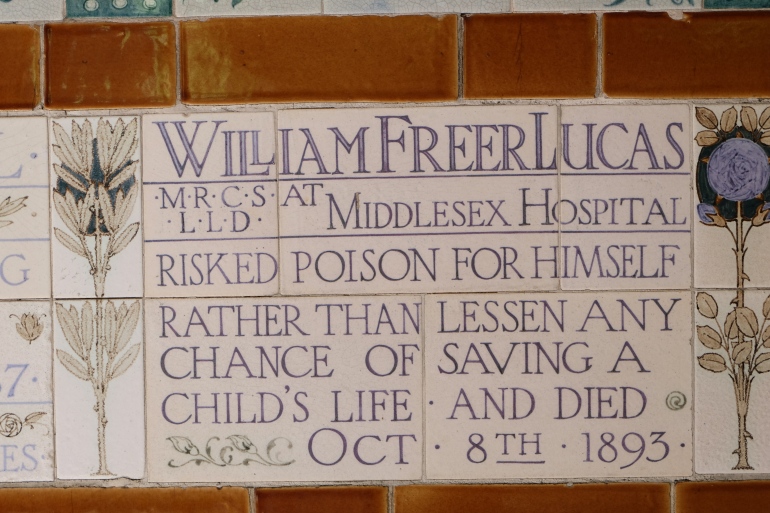 I was reminded again of the risks of infections when I read about the story of William Freer Lucas. He was a casualty physician at the Middlesex Hospital who was treating a child with diptheria. The child required a tracheotomy and for this needed to be anaesthetised. As the procedure was taking place, some infected matter landed on the doctor’s face. He continued the procedure, leaving his face alone. Although he cleaned off the muck later the disease had already found a new host. Dr Lucas died of diptheria. 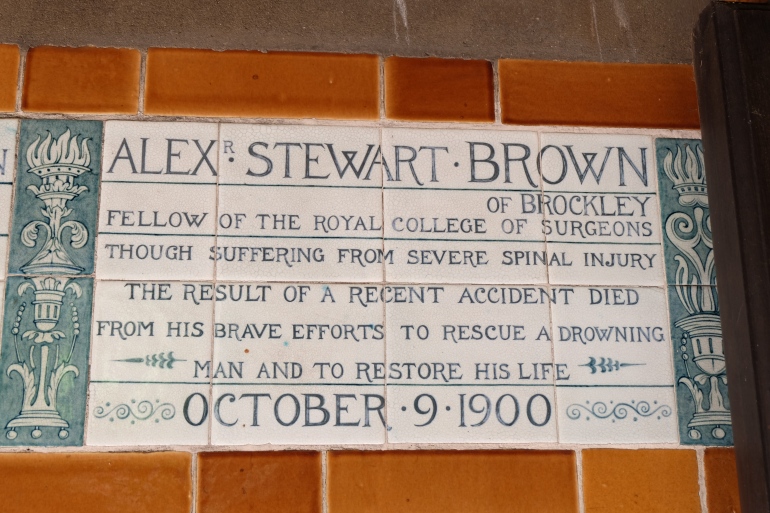 Alexander Stewart Brown was known to have a spinal injury. That didn’t stop him trying to save a drowning man and try to resuscitate him in 1900. Dr Brown was in Boulogne with a friend who got into difficulties when swimming. He rescued his friend, resuscitated him, but unfortunately caught a chill and died.

Spending some time in this tranquil park was a delight, and a part of London that most visitors don’t see. The stories on the plaques were poignant and a reminder as to why we have so much protective equipment around today.